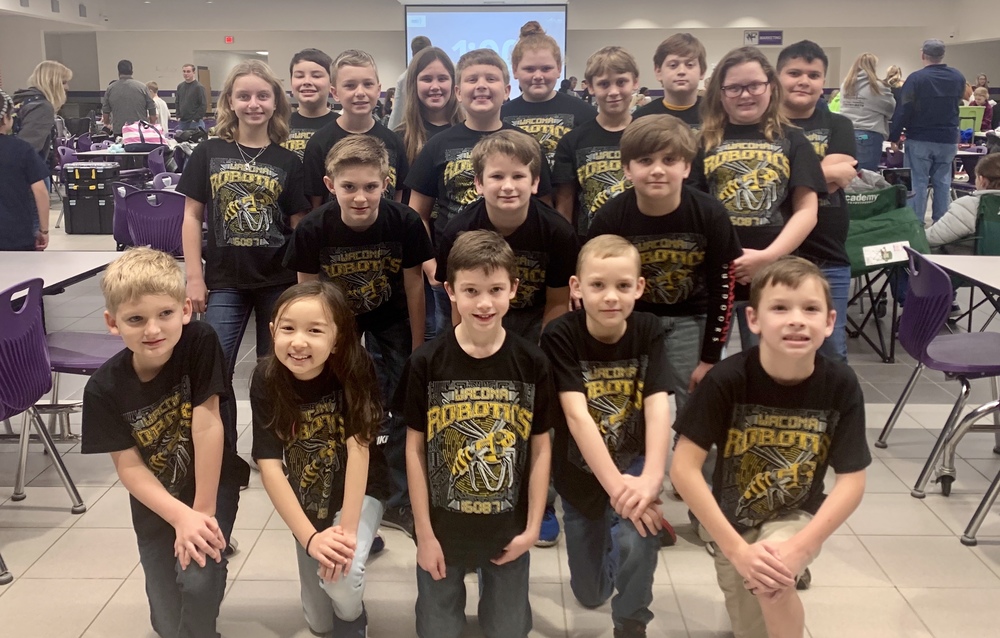 Wacona Elementary School’s Vex IQ Robotics Team has had an awesome season! This year, the team attended four competitions, placing in the top 12 at each one.

Wacona competed with four robots in the State Championship held recently in Cumming, Georgia. Out of 41 teams, Wacona Elementary was the only team hailing from south of Atlanta. Students competed in Skills Challenges, such as Programming and Driver Skills, as well as six Teamwork Matches during this event. Robot 16087A members Ashlyn J., Isaac M., Layla P. and Owen S. placed 15th in the Teamwork matches. Owen S. and Ashlyn J. racked up 27 points and came in 8th in the Skills Challenge. This team and their robot are ranked 9th in the state of Georgia and 309th in the World.

Robot 16087B members Valyn H., Brandon H., Seth K., Jacob L., Jarrett S., and Ashton S. placed 28th overall. Seth K., Ashton S., and Valyn H. had a combined score of 20 points in the skills challenge, placing them 19th in the Driver Skills Challenge. This team is ranked 18th in Georgia and 689th in the World.

Robot 16087C members Evan G., Lucas H., Jayce P. and Sloan Z. placed 3rd in the Teamwork Challenge. Lucas H. and Jayce P. had a combined score of 25 in the skills challenge, placing them 12th in the Driver Skills Challenge. This team is ranked 8th in Georgia and are ranked 286th in the World.

Robot 16087D members Colin D., Brayton H., Ryder K., Andrew M., Eli S. and Elizabeth S. placed 25th in the Teamwork Challenge. Andrew M. and Eli S. had a combined score of 26 in the skills challenge, placing them 9th in the Driver Skills challenge. They are ranked 10th in the state of Georgia and 353rd in the World.

These teams have worked very hard to improve their driving skills and game strategies for this year’s game “Next Level”.  Faculty Coaches Mindy Pearson, Ann Guess, Lacey Gruver, and Andrea Miller are extremely proud of the progress students have made. Wacona Robotics is very appreciative of the great administrative and parental support they have received, as well as from our corporate sponsors.